Have a Question or Want a Free Market Report?

Find your next home today

$COUNT$ listing$S$ available. Let us find the one that's right for you.
What's Your Home Worth? Find your home or condo's value in today's market, for free.Find Out

Recently from Our Blog 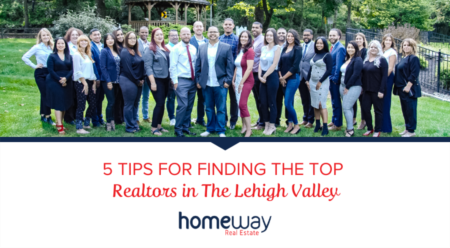 Lehigh Valley is a burgeoning area in the economic center of the United States. Bordering Pennsylvania and New Jersey, Lehigh Valley is just a short drive from New York City and Philadelphia. Home to over 60 municipalities and the three cities of Allentown, Bethlehem, and Easton, Lehigh Valley has a population of more than 800,000 people and is in the top 70 when it comes to metro areas in the United States. The economic output of the region is no slouch either -- over $40 billion is generated each year.

So when it comes to Lehigh Valley real estate, the trend points up. With over 15,000 businesses keeping economic activity moving in the area, Lehigh Valley is one of the premier regions for development in the entire Northeast, trailing only New York, Philadelphia, Pittsburgh, and Boston. Allentown is the region's largest city, with a population over 120,000, and Lehigh County itself is the fastest growing area in the entire state of Pennsylvania. By 2010, the county was ranked in the 79th percentile for population growth nationally.

Just 75 miles to the west of New York City and 60 miles northwest of Philadelphia, Lehigh Valley real estate sits is in that perfect position between two of the nation's largest cities, and it is one of the fastest-growing economies in the area with a five percent increase in GDP each year. Unemployment as of mid-2019 was a super low 3.9 percent, and the area is consistently ranked as one of the best performing regions in the Northwest. Lehigh Valley has seen its population explode in recent years, and the Allentown downtown redevelopment initiative has led to $1 billion in new development projects between 2015 and 2018, making it only one of six communities nationwide to achieve this level of success.

But the best part of Lehigh Valley is its affordable real estate, which is significantly cheaper than the surrounding high cost of living areas such as New York City and Philadelphia. With lower taxes and more affordable real estate, Lehigh Valley is becoming a beacon of hope for those that want to stay in the Northwest where they're only a day's drive from just about everything. In fact, several large international companies have established operations in Lehigh Valley, with tens of millions of dollars going to development and new jobs in the area.

As one of the fastest-growing regions in Pennsylvania, Lehigh Valley real estate offers many opportunities to commuters that want an affordable place of their own while avoiding the exorbitant costs of living in New York, New Jersey, and Philadelphia. It's also a beautiful place to live as part of the Great Appalachian Valley, and beautiful limestone dots the region. With the Blue Mountain to the north and the South Mountain to the south, Lehigh Valley sits in the valley formed by the Lehigh River, which runs between the two mountains. It's also part of Pennsylvania Dutch Country, which provides many great sightseeing and shopping opportunities.

Lehigh Valley real estate is also great when it comes to the climate, which is true, a four-season country with warm summers, snowy winters, and short and mild springs and falls.

By 2040, experts estimate that the area will increase by more than a quarter, bringing more than 200,000 people to the area, which means lots of opportunities to sell Lehigh Valley real estate for a hefty profit if you buy now and beat the rush.

To learn more about Lehigh Valley real estate, contact the experts at Homeway Real Estate. We've been helping people buy and sell homes in Lehigh Valley for years, and we can help you find a beautiful new home or sell your existing one with the ultimate in privacy, security, speed, and efficiency.